On the 8th, 10th and 12th of May, the 63rd edition of Eurovision will take place in Lisbon, Portugal. Besides a spectacular night for music lovers and bookmakers, Eurovision has become a feast for social media in recent years. Granted, BBC’s commentators do a great job, but if you really want to have a good laugh, you should keep an eye on social media. We dare say that Eurovision is eminently the Twitter event of the year. But are we just having fun, or do we have an ear for music as well? Can social media predict the winner, for instance? Are our predictions perhaps even more accurate than those of bookmakers?

Just like every year, the Eurovision Song Contest promises to deliver an enormous diversity when it comes to outfits, musical genres and acts. Whether it’s Hungary’s metal band or Estonia’s opera singer: they all aim for the coveted top of the podium. We analyzed which country is the best bet for a series of ‘douze points’ according to social media. A remarkable first fact: the biggest source in these predictions isn’t Twitter but Youtube, where fans are climbing over each other to speculate about potential winners. 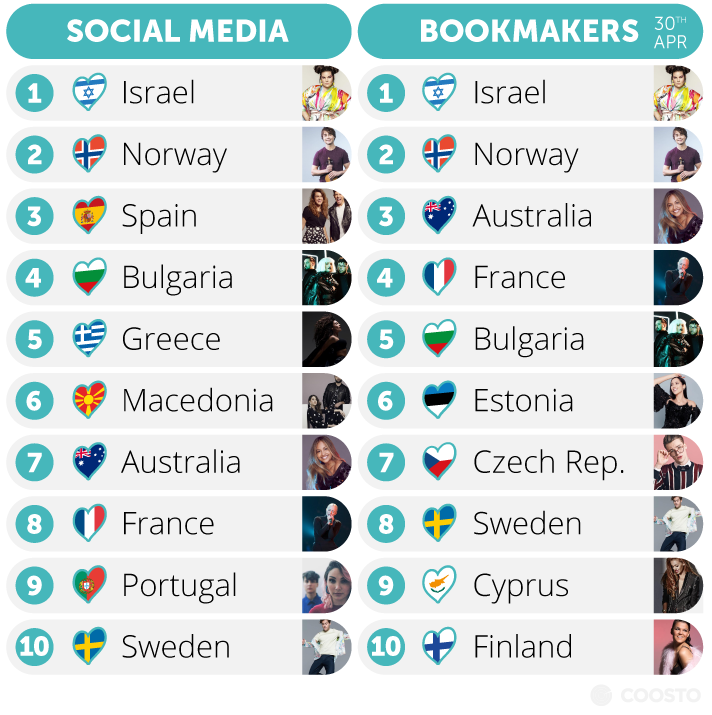 It looks cut and dried that Israel will take home the victory, just ahead of runner-up Norway, social media and bookmakers (odds of May 30th) agree. But does social media trump the bookies when it comes to the other spots? We’ll know May 12th.

In order to predict, we counted the number of messages on social media about a certain country or artist in relation to the Eurovision Song Contest. We corrected this number for the degree of positivity or negativity (a vexed Eurovision act isn’t necessarily a popular act, obviously).

Would you like to receive the latest Coosto news?